Yesterday saw a huge crash on the newly launched Polkadot (DOT) futures market on Binance. The move was apparently orchestrated by a single user. While the move itself could be regarded as an honest mistake, a deep dive into the workings of the DOT futures contract show some organized effort behind the crash.

The exchange saw an increase in the opening interest rate just 24 hours before the massive downwards shift shows some foul play from a manipulating player on the market. Here is the graph of the move: 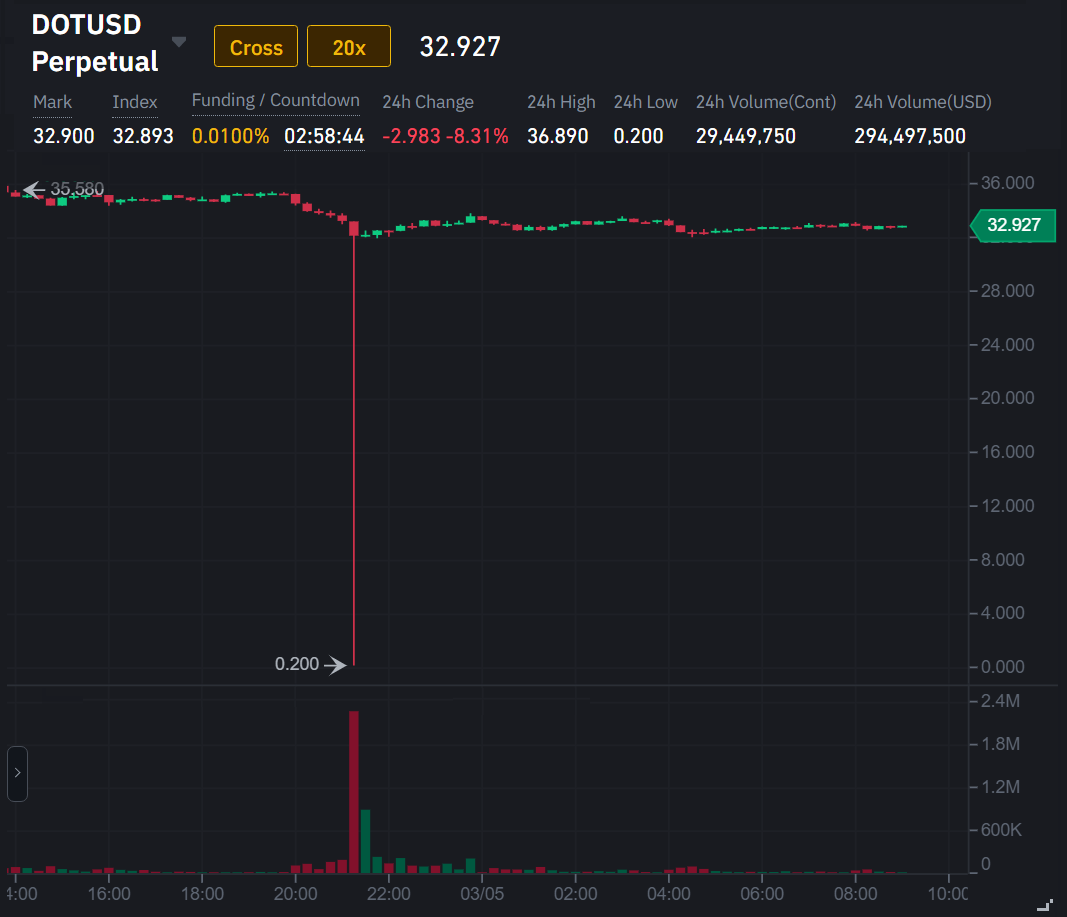 As you can see, a massive downwards candle occurred in less than three minutes. During this, $20.5 million worth of DOT futures contracts were traded and the price effectively dropped more than 99.5%. However, the drop itself didn’t result in many liquidations. This is due to a fortunate technicality in which perpetual futures contracts are actually liquidated by actual spot market positions. That was a big saving grace for the market as hundreds of traders avoided liquidations and resulting losses because of it.

The shady open interest increase from around $1.92 million to as high as $3.34 million hardly 24 hours ago shows that the manipulator risked a minimum amount of money to get gains later on. This alone resulted in an increase of $47 million before the crash itself.

What will Happen to Futures Trading on Binance?

Binance is swiftly becoming the center of futures trading around the world. It particularly attracted new clientele after the largest crypto futures exchange BitMEX ran into legal problems just last year. However, the episode points to a lack of preparedness or foul play from Binance’s end. The exchange has been heavily promoting its derivatives platform with new prize-based schemes launching every now and then. But, the latest episodes raise a question mark on the exchange’s ability to stop massive market manipulation occurring there.

The exchange itself has released a new press release and has promised to monitor and regulate the markets more efficiently in the near future. Since the perpetual futures contract holders weren’t affected too much, the exchange may not take this as seriously as it should. All in all, it also raises considerable doubt on the ability of cryptocurrency exchanges to offer derivatives effectively and if manipulation occurs, hold the perpetrators responsible. After this activity, Binance may also face some scrutiny from national regulators as it expands its trading options around the world.

Everything You Need to Know about May 2020 Bitcoin Halving

Elon Musk May Favour Green Cryptocurrency, but Which One is it?

The hottest NFT: Max Denison Pender creates and destroys a self-portrait in a volcano

Bitcoin Could Reach $0.25 Million in the Next Five Years: Morgan Creek CEO