Bitcoin Price Index During Last two Halvings in 2012 and 2016

Bitcoin was created on a deflationary mechanism by Satoshi Nakamoto in 2008. The total supply was kept around 19 million Bitcoin with new coins being created through an energy intensive process called Mining. Through mining, miners dedicate their computing resources to earn newly minted Bitcoin in a fair, transparent manner. Every 10 minutes, the Bitcoin network creates 12.5 Bitcoin at the moment that are shared by the mining pool that discovers the latest block. However, it wasn’t always 12.5 Bitcoin and it will soon change with the latest Bitcoin halving on May 8, 2020.

Why will that happen?

Instead of having an unlimited supply like modern fiat currencies like the US Dollar, Euro, Pound and all of the rest, Satoshi set the maximum number of coins that can ever be reproduced i.e. the 19 million BTC figure and the supply was designed in such a way that around every four years, the supply was going to be halved. So, when the network was created back in 2008, it had a supply of 50 Bitcoin every 10 minutes. In 2012, the supply was reduced to 25 Bitcoin for the same time period and then in 2016, the supply was further reduced to 12.5 Bitcoin for the very same amount of time. Now, with May 8, 2020 approaching, Bitcoin’s overall supply will be further reduced to just 6.25 BTC for the same time frame. Naturally, with the supply ever-reducing, Bitcoin’s demand-supply gap is expected to increase in the future in demand’s favour thus jacking up the overall price index.

This year’s May 2020 halving is the single most anticipated Bitcoin halving in its history. Both 2012 and 2016 Bitcoin halvings had a fraction of the total userbase and adoption and thus, this year’s halving has garnered a lot of attention, both within the crypto community and beyond. Initially, it was believed that the halving will result in a massive bull market before the halving is eventually undertaken across the nodes around the world. However, this bull run has so far failed to materialize. The price has actually dropped slightly in the buildup and even witnessed a massive selling spree on March 12 with a massive 40% drop witnessed. So, with the bull market sentiment in doldrums, it is natural to rewind and see what happened during the last two Bitcoin halvings. While history repeating itself isn’t always the case with Bitcoin, it is always extremely useful to gather valuable insight into the market by observing previous trends.

The first of the Bitcoin halvings occurred on November 28, 2012 with the block 210,000. The overall Bitcoin mining reward per block was reduced from 50 BTC to 25 BTC in the process. Now 2012 was altogether a different era for the cryptocurrency. It was the only cryptocurrency in regulation apart. Litecoin was in development but it was not well-known. The number of miners was small and people used the graphics cards on their personal computers to mine Bitcoin. The price approximation was also a work under progress so, figures cannot be entirely reliable.

Here is an approximated graph of the first Bitcoin halving: 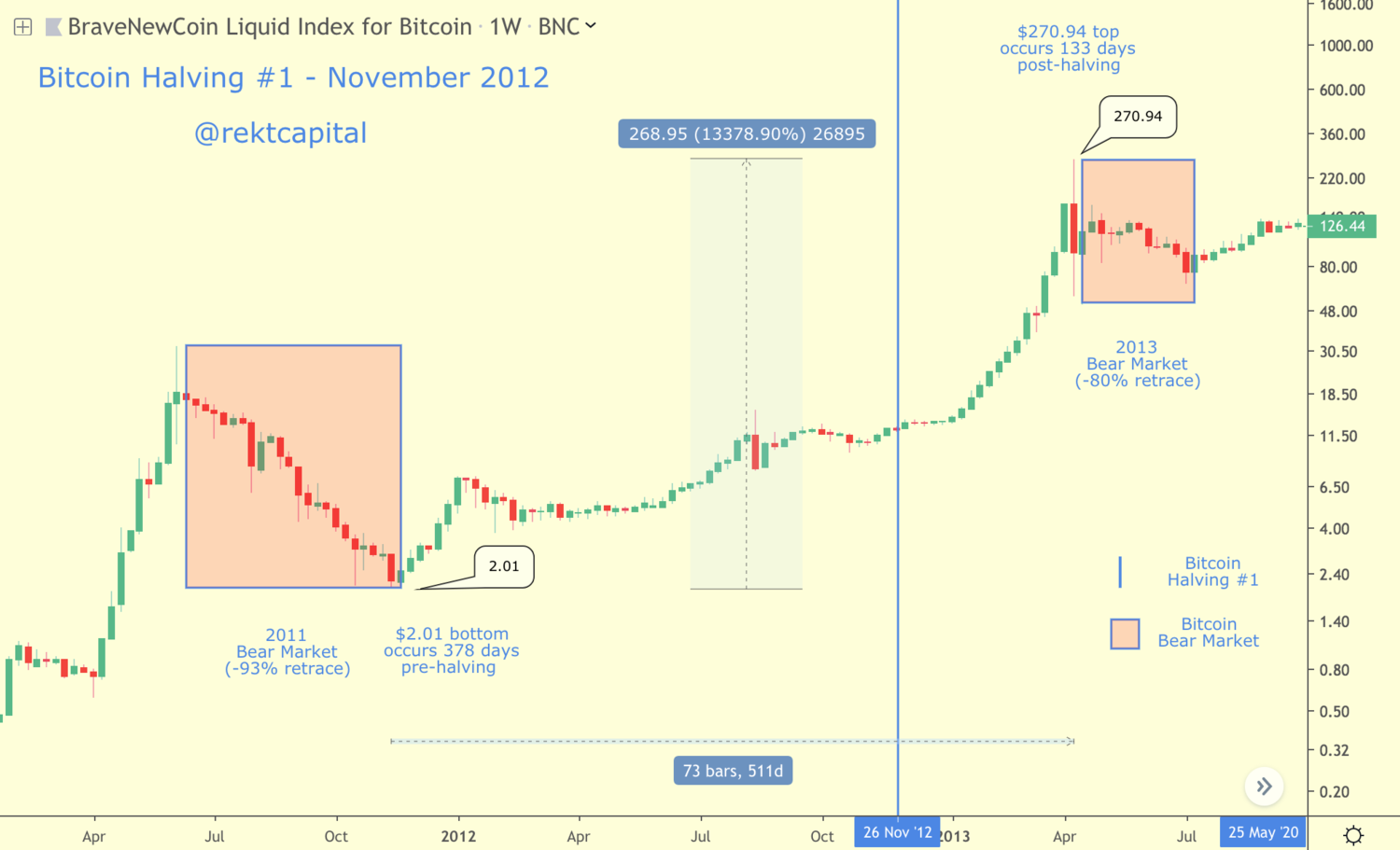 As you can see from the graph above, Bitcoin rose from below $1 levels in the buildup to the halving process to around $11 eventually around the actual halving date. However, the actual halving period was non-descript and saw no major change and the cryptocurrency fluctuated between $13 and $8. However, after the halving, mid 2013 saw massive increase in price. The price index rose several times and increased to a maximum of $270 during the process before stabilizing (relatively) around $130 mark. This presents a ten-fold increase in the price index eventually with the maximum increase of around 25 times.

Now the second of the Bitcoin halvings had pretty much different conditions altogether. It occurred on 9th July 2016 and the mining reward was reduced from 25 Bitcoin to 12.5 Bitcoin. This is how it played out a few months before and after the halving process.

As the readers can see from the graph, the Bitcoin price index rose from $450 to $780 in the buildup to the July 9 actual bitcoin halving date. This represents an increase of around 71.1% at the maximum. But, the rise wasn’t permanent and the price index experienced a major drop just before the halving around June 23 but managed to steer clear from the resistance of $500. Interestingly enough, around the actual halving date, nothing extraordinary happened. The price index hovered around the $600 figure and then on August 2013, it witnessed a drop to $560 and then slowly recovered some losses. So, in the months immediately before and after the actual halving, nothing extraordinary happened except for one major price pump seen on June 23.

However, here is what happened till the end of next year:

In 2017, Bitcoin had a remarkable bull run that resulted in the cryptocurrency’s price index increase from the below $500 to around $19,900 eventually. This major rally remains the biggest pump the market has witnessed in history and at least part of it can be attributed as long-term effect of the Bitcoin halving. For the first time, Bitcoin was a buzz word and ICOs were being created and funded at an astonishing rate. While needless to say, Bitcoin did suffer a drop after this massive spike and has been mostly under $10,000 ever since but even that represents a massive difference from the pre-2016 levels of around $500.

This graph is often touted by some of the wisest traders around. Many believe that immediately, the Bitcoin price index may not experience much of a price uptick in the immediate aftermath or buildup to the halving process. But, give it a year or two, Bitcoin’s demand will far increase its supply and we might be in for a decent bull run at that time. Some predict that it might happen at the end of this year while some insist it will occur at the end of next year following 2016’s trend. However, none is certain except the fact that most traders agree that the deflationary price mechanism will remain true to its roots and help increase worth of the existing Bitcoin in the long-term.

Just relying on previous Bitcoin halvings data, it is clear that the previous data suggests that price may fluctuate in the buildup but remains stable during the actual halving process. But, after the halving, the cryptocurrency experiences a dramatic price breakout and several times is witnessed.

Chainlink on path to recovery despite hitting death cross

Dogecoin is Now the Seventh Listed Crypto on Coinbase Commerce

Bitcoin bounces back at 5.5% despite the volatility of the market

Bitcoin mining drops amidst the situation in China